Sightings Statistics of the year 2020 in São Miguel island

2020 was an atypical year, and for many, finally it came to an end. After a 2019 with big surprises, big things were expected for 2020! But who says that despite a year that definitely marked the lives of everyone alive, 2020 was not surprisingly good cetacean wise?

Let’s have a look through the year and discover how fortunate the Azores are!

Without breaking the rule, once again, our beloved common dolphin (Delphinus delphis) was the most sighted species of the year, being found in almost 70% of our trips. However, the bottlenose dolphin (Tursiops truncatus) did not stay much behind, as it was encountered in 60% of the tours. Throughout the year, both species were met in every month we went out to the sea. We can say that these resident species are abundant in the Archipelago, love the waters surrounding it and most of all love to bear us company and amaze us with their bow-riding skills and incredible jumps, that so much delight our guests every single time.

Surprisingly, this year, sperm whales (Physeter macrocephalus) were not the third most sighted species like they usually are, but instead the Atlantic spotted dolphin (Stenella frontalis). This is a migratory species that can usually be found between June and December, and although they are mostly watched during the summer months when the water is warmer, we came across them in 30% our trips in September, October and November. They use the waters of the Azorean Islands to feed, breed, give birth, and nurse. Like every year, this species arrived in big groups and presented us with several of the tiniest cetacean babies that we can find in the archipelago.

Sperm whale! The only resident whale species in the Azorean waters and the so famous symbol of the archipelago. They were the fourth most sighted species of the year. Observed all year round, they delight us every season of the year, from fluking behaviour before they go hunting, to newborn babies, and breachings of individuals of all generations, we saw everything you can imagine. But two specific events made this year truly special considering sperm whales. First, and late in the year, November was marked by the sighting and acoustically recording of a new male, one never spotted before, to whom we gave the name Mr. November! Can you guess why?! Second, and even more exciting, we witnessed Mr. Liable, our most-resighted individual, breaching! A behaviour never contemplated before by Futurismo’s team in the 20 years of sightings of this big male!

The biggest difference this year was the springtime. Usually, a time of the year full of life in the Azorean waters, and definitely the best time of the year to meet baleen whales. However, this year, and although we know they were here, we were not able to go out at sea. Blue whales (Balaenoptera musculus), one of the species that we were most excited to encounter, were not seen by our team. But we did find other baleen whales. The year started with some amazing encounters of humpback (Megaptera novaeangliae) and fin whales (Balaenoptera physalus). Who knows if they were not escaping the cold winter waters found in the north of the Atlantic Ocean to warmer waters more to the south? In the summer, we sighted fin whales too, but also sei whales (Balaenoptera borealis), these probably coming back from their breeding grounds, and travelling to the feeding grounds. And if this is not enough, this year was also marked with two more surprises within the baleen whales. One was the sightings of Bryde’s whale (Balaenoptera brydei) during the summer months, after 2 summers without seeing any individual of this species. Bryde´s whale is a baleen whale species that prefers tropical waters and are therefore rarely seen in the Azores. Their presence in the archipelago was only confirmed in 2004, and they were sighted again in 2009, 2013, 2017 and now 2020. The second was the sighting of a minke whale (Balaenoptera acutorostrata) in August, one of the smallest species of baleen whales, and also not often sighted in the Azores.

Another incredible sighting was the one of a Sowerby´s beaked whale (Mesoplodon bidens). Although present in the Azores, Sowerby’s beaked whales pass most of their time underwater and are not often seen on the surface. Nevertheless, we were able to identify this species once in July.

Going back to the dolphin’s family, and more commonly encountered in the summer months, the year started with a group of pilot whales (Globicephala macrorhynchus). A couple of sightings were also made in the summer. Striped dolphins (Stenella coeruleoalba), an offshore species was observed a few times in the summer too. Risso’s dolphin (Grampus griseus), a species characterized by their rounded head and white marked body were also recorded in the late summer and autumn months. And in the early morning of a November day, we re-sighted our resident Risso’s dolphin family. They haven’t been seen since 2019!

To end the year in the best way, in one of our last trips to the sea, we were surprised by a group of false killer whales (Pseudorca crassidens), the first and only sighting of the year!

This only shows how amazing and full of biodiversity the waters of the Azores are!!! Do you want to know more about these incredible animals, our daily and monthly sightings, and our work? Visit our blog. 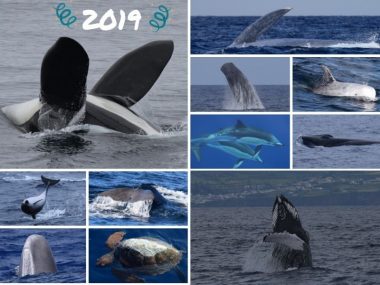 Read More
Another year came to an end and here’s the outcome of our sightings! As usual, our resident species…
Read More
0
0