March… the turning point between winter and spring. The month in which the cold gives way to an increase in temperature and a longer duration of the days together with a new cycle of flowering of trees and plants intensifying the colour spectrum. In this season of new beginnings we couldn’t do less then restart our activities on the water after such a long time without going out due to the changing and uncertain situation that the world is experiencing. We went out again and saw the animals that let us enjoy whole heartedly. This year our adventure began a little late, but it began in a good way with 11 trips, all with clients.

With spring, in addition to the resident species in our waters all year round, it is time to meet the migratory ones again. We started to observe them in the second half of this month and we love to see them so much in our waters during this season: the baleen whales. Thus, this month our ranking was led by common dolphins on every tour, followed by sperm whales, bottlenose dolphins, blue whales and fin whales.

The dolphins, as usual, most days were curious approaching and socializing close to us. Sometimes some even were leaping and showing off. The sperm whales did not disappoint us, we encountered males as well as groups of females reunited with their calves remaining on the surface for a long time while some showed us their flukes and a big male performed peduncle throws. Although fin whales were only sighted one day, we could see two individuals that showed us their dorsal fins and their two blowholes perfectly. The most special thing was seeing the largest animals in the world after so long as in 2020 they passed by without us joining them! On various occasion we were watching the extended version! It showed us its long body coming out of the water and even its tail before going back to the depth likely in search of krill. These kinds of observations are not seen many times in life.

Like every month, we were not only accompanied by cetaceans. The Portuguese man-o-war, always moved by the wind, marked its presence on a large amount of our trips. We also noticed the salps, these transparent organisms that move by contraction and so pumping water through their bodies. Oddly enough, despite their different appearance they have more in common with humans than one might assume. Twice we were able to see a loggerhead turtle once in addition of pilot fish. A thornback ray catch in the hands of a local fisherman was also presented.

Above the sea, in the air we were surrounded by a loyal bird species, the Cory’s shearwater, which were with us every day we went out as this year they were back on the Azorean water before us. The yellow-legged gull is almost omnipresent, even though mainly without showing us its yellow legs. As well as the kittiwake, which took advantage of the last days of winter in the open ocean.  We had also the opportunity to spot the black-headed gull on two occasions and birds such as the Manx shearwater, the Bulwer’s petrel, the great skua and even the northern gannet on one occasion.

Now that the productive time has begun in our ocean it is generating more life every day which means more abundant food for our resident animals and the visitors, the migratory ones. We are looking forward to it! 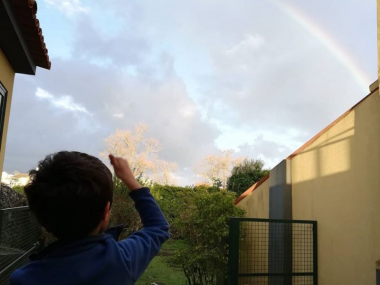