Sperm whales are fascinating animals – they are the largest toothed predators in the world, they have the biggest nose and brain in the animal kingdom and they are among the deepest divers of all whales. But their preference for abysmal, usually offshore waters means there is still a lot we don’t know about these leviathans of the deep oceans. Futurismo’s biologists are trying to shed some light on the lives of these whales, and luckily around the Azores islands we can see sperm whales year-round within a few miles of the coastline. During our tours we have the special opportunity to study their occurrence and learn more about the individuals that we encounter. Since 2010 Futurismo’s biologists have been systematically taking photographs for identification purposes, and we even have some older photos on record that date back to 2003. We can recognise each individual by distinctive natural marks and scars that they have. Individual sperm whales are traditionally identified by comparing marks on the edge and undersides of their tails, however many individuals can also be recognised by marks on their bodies.

This photo-ID research can teach us many things, such as how many individuals are in a population, whether or not the same ones return to a given area, where they go when they leave the area (by comparing photos from different areas), how long they live, how often each female has a calf, and who is seen with who. Futurismo’s sperm whale photo-ID research has shown us that about 1/3 of all individuals identified off São Miguel island return at a later date. The remaining 2/3 have been encountered only once, meaning they may be transient individuals that are just passing by, or they may be re-sighted in the future. By comparing photos from 2010 to 2017 we have identified about 400 different sperm whales off São Miguel Island, but we know that this is not the entire Azorean population and we believe there should be several thousand sperm whales in the archipelago, especially during the summer months. We have many resightings of known individuals, some who we have got to know very well over the years and can recognise in an instant when we encounter them. Our most well-known example in São Miguel is a whale who we call Mr Liable, a large male who we have encountered more than 180 times since our first photo of him in 2004.

Mature male sperm whales like Mr Liable live a solitary life, but the females form stable family groups (called “units”) that are highly social. Compared with other places in the world, not much is known about sperm whale units in the Azores. However, Futurismo’s photo-ID research is beginning to show us that units only contain an average of 6 whales, but units often come together to form large groupings of up to 50 whales together. 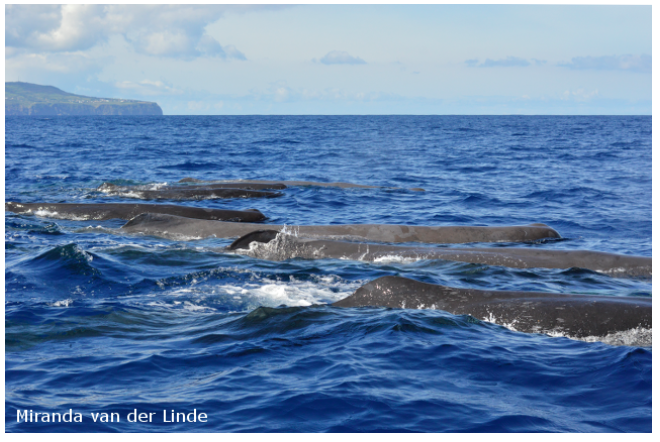 We have identified 12 distinct units that have been seen in at least 2 different years, and we classify these units using different colours. Our most encountered unit is the “red unit” which has been encountered 8 years in a row, from 2010 to 2017. Part of our customer experience is sharing our photo-ID work with our passengers, both during the tour and when we return to our base. In Futurismo’s briefing room our passengers have the opportunity to see our sperm whale ID poster and catalogue to try to match their own photos from the tour. We even have some sperm whales in our catalogue that were named by our passengers, as they kindly contributed their photos to our sperm whale catalogue. We are always grateful when you share your photos and our biologists are more than happy to share their knowledge of these amazing animals that we have the privilege to encounter during our tours. 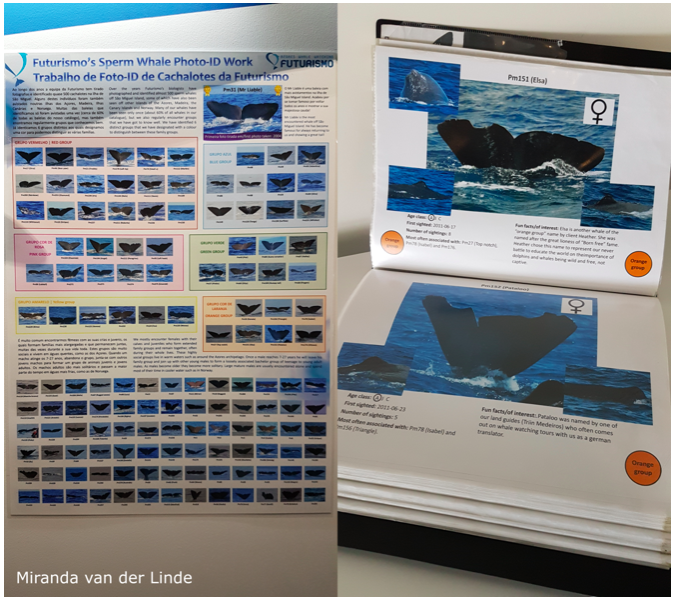