There are about 38 known oceanic dolphins or delphinids (Delphinidae) recognised today, in 17 genera. The delphinids is different to the river dolphins and porpoises. The appearance, colouration and size varies a lot between the delphinids. The smallest dolphin is the Hector’s dolphin and the largest is the orca (or killer whale), reaching almost 10 m. The average life expectancy is 20-60 years for dolphins (fairly wide range but it includes many species and a simple rule: the bigger the older).

In the Azores we can see 11 species of oceanic dolphins, some of them are very common and called residents because we can see them all year around. These are the common dolphin, bottlenose dolphin and the Risso’s dolphin. Others we only see during spring and summer because they prefer warmer water, species like Atlantic spotted dolphin, striped dolphin and pilot whales. And the rest, the false orca, orca and rough-toothed dolphin, are rare visitors. Fraser’s dolphin has also been recorded in Azorean waters.

All the dolphins are carnivores and most species feed on fish, but several species also feed on squid, octopus and crustaceans. And a few species, like the orca, feed on other prey like seabirds, rays and sharks, turtles, seals and other cetaceans. In the Azores we see feeding behaviour mainly from the smaller dolphins, sometimes in mixed groups between common dolphins and spotted dolphins. They drive small schooling fish, like mackerel, close to the surface in tight bait-balls. Often we see birds taking advantages of this, like yellow-legged gulls, Cory’s shearwater and common terns, but also Manx shearwater and great shearwater. We also see other marine species take part of these feeding frenzies like yellowfin tuna, bluefin tuna, bigeye tuna, marlins and sharks. Some of the dolphins species we can see here are deep divers, like the bottlenose dolphin and the Risso’s dolphin, going down to depth of 500 meter to hunt squid. We often see these species close to fishing boats. The orcas we saw here in 2012 and 2013 took loggerhead turtles and in 2007 and 2015 we saw them hunt and kill fin whales.

What is the difference between a dolphin and a porpoise?

The dolphins have conical teeth while the porpoises have spade shaped teeth, porpoises don’t have the long beak as many dolphin species have, and there are differences in the brain and vocalization. The behaviour is different, porpoises are more timid animals, swims slow and are not very active on the surface. They live alone or in small pods, and the most common social group is mother and calf. Dolphins are more active on the surface, often curious and playful towards boats, bowriding and wakeriding, jumping and breaching, and are often found in larger groups, and even in superpods of thousands of individuals. 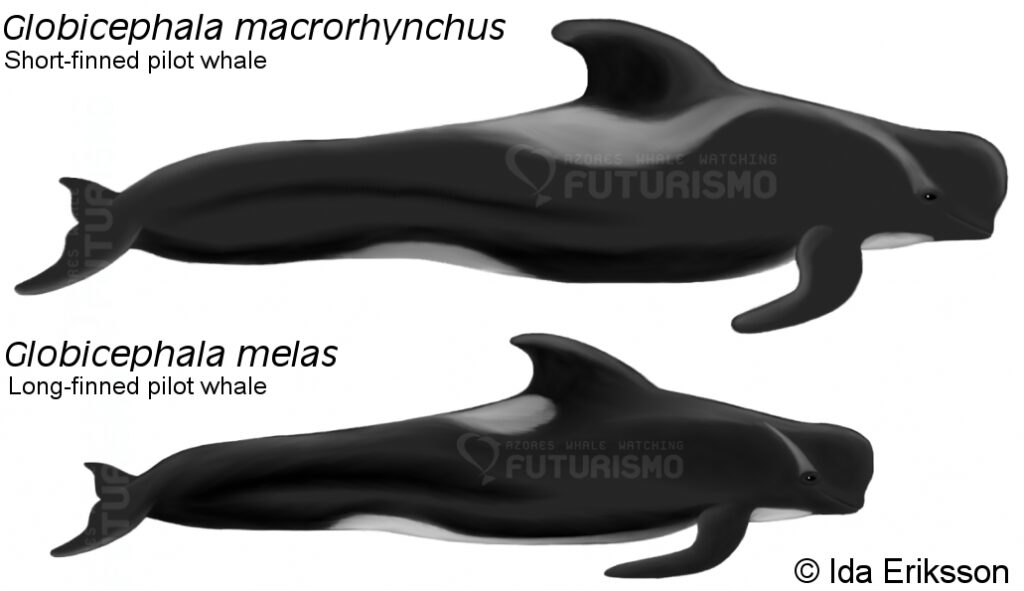