Uncategorized > Listening to the sound of our ocean

Listening to the sound of our ocean

What it is a hydrophone and why do we use it?

Just as a microphone collects sound in the air, a hydrophone detects acoustic signals when submerged in the water. It transforms the incoming sound waves over a wide range of frequencies into electric signals. The hydrophone allows us to hear the sound as it is emitted underwater, coming from any direction (NOAA, 2019). 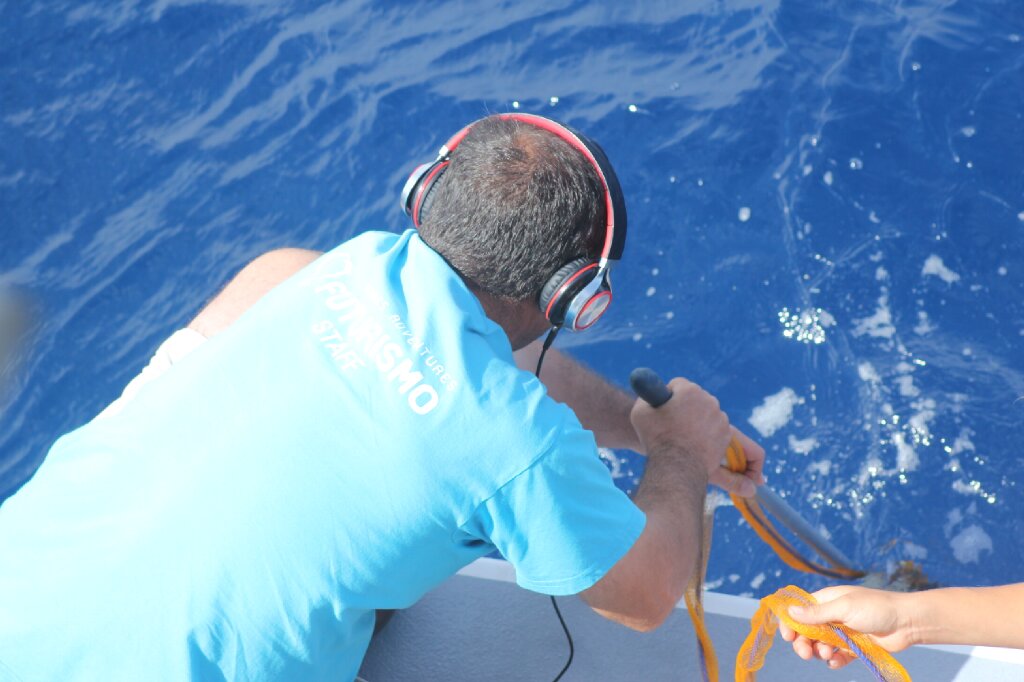 What sounds do whales and dolphins produce?

Sound is an important component of the survival of marine life, and it is used in many ways. Marine mammals, for example, have adapted in order to better use sound underwater. While toothed whales and dolphins use clicks to communicate, and echolocation for hunting and navigating, baleen whales generally produce a series of low frequency sounds (see figure 1 as an example) to communicate. Long distance communication is an important social component and very helpful because sound travels further in water than on land. Baleen whales, for example, can communicate up to around 180 km! (Balcazar et al., 2016). We can hear the sounds and clicks produced by cetaceans by using a hydrophone, but we cannot hear all the sounds!

As seen in figure 1, whales and dolphins emit sound at different frequencies, which means that not all hydrophones can detect and record all the species. Humans can only hear a certain range of frequencies: between 20 Hz and 20 000 Hz. This frequency range is what we called the “human auditory field”. Any sounds produced below 20 Hz, such as the ones emitted by the baleen whales, are low-frequency sounds and are called infrasounds; they are not audible to humans!

Figure 1: A graph comparing the frequencies of different emitted sounds and the hydrophone, which is a sound recorder and marine mammal sound frequencies cited from Woods Hole Oceanographic Institution (DOSITS, 2019).

On the other side, we have frequencies above 20 000 Hz, which are called ultrasounds. These sounds are high-frequency sounds that, in fact, humans cannot hear either. For example, in figure 1, the harbour porpoise clicks start at approximately 110 000 Hz (Woods Hole Oceanographic Institution (DOSITS); so humans cannot hear it.

What does Futurismo use hydrophones for?

In Futurismo we have several hydrophones that we usually use during our whale watching tours. They allow us to listen to frequencies that humans can hear (see the figure 1), so our guests onboard can hear what is happening underwater. The hydrophones used by Futurismo here in São Miguel and in Pico are mainly used to listen to the sperm whale echolocation clicks and the echolocation of dolphins. To hear these marine mammals, we can use a non-directional hydrophone, which “collects” sound from all directions (figure 2A). However, sometimes the hydrophones are also used to search for whales or dolphins. To do so, we need to use a directional hydrophone (figure 2B). It has a baffle, which is a plate-like structure that isolates the noise and vibration produced by the active element (Embleton, 2011) which could be an echolocating sperm whale. It is needed to have only one side of the hydrophone exposed to the ocean, so just one side that can collect sound. This way, the hydrophone can be turned into different directions, and sound will only be heard when an echolocating animal is found (see figure 2B). We can then go into the direction that the sound is coming from. We have been able to find sperm whales up to 10 km of distance from our boat by just using the hydrophone!

Figure 2A: Hydrophone records in all directions and can pick up all the sounds of the whales (Zetlab, 2019). 2B. The“baffle” is attached to the hydrophone, and it blocks the sound behind it. In the figure it corresponds to the left side, i.e. the lighter part of the ocean. The hydrophone only picks up sounds in front of the baffle (brighter ocean, on the right side) (figure adapted from Zetlab, 2019).

What about the sounds (infrasound and ultrasound) that humans cannot hear?

We cannot hear the infrasounds and ultrasounds, however there are ways to measure them. Hydrophones can be set at different frequencies and record in this manner. Then, those records can be changed to a frequency that humans can hear. For example, the sound of a blue whale in this spectrogram had to be sped up by a factor of 10 to be audible by humans (DOSITS, 2017). The echolocation of a harbour porpoise, which produces one of the highest pitched ultrasounds by any animal on earth (Wahlberg et al., 2018), had also been slowed down to be audible to humans. For sperm whales, there is no need to alter their sounds, as they are naturally audible by humans.


DOSITS (2017). Discovery of sounds in the sea. The University of Rhode Island. Accessed online in February, 2019. https://dosits.org/galleries/audio-gallery/marine-mammals/baleen-whales/blue-whale/


NOAA. (2019). What is a hydrophone? National Oceanic and Atmospheric Administration. Accessed online in February 2019. https://oceanservice.noaa.gov/facts/hydrophone.html