Now that
2017 is over, it’s time for us to think about what happened in this year and of
course to continue studing and learning about this beautifull animals we are
pationated with, 2017 has been a very interesting year for us in whale and
dolphin watching off São Miguel:
A total of 16 different species were encountered
this year. The most frequently sighted as usual have been our resident
dolphin species, common and bottlenose dolphins, this is a tendency that we see
every year with this species as there are some families that are living around
our island. Our other resident species, the Risso’s dolphin are always less
sighted here in São Miguel, but in this year this species was seen every month,
at least once.
This has been a very good year of sighting of our
resident whale, the sperm whale as we can see in the image below; this is a
whale species that may be encounter all along the year but is clearly more
encountered in early summer, during the summer and in the late summer, but
present all along the year.
Atlantic spotted dolphins have been a
surprise this year as they have stayed with us for a very long time this year,
they started appearing in the month of June, giving a very good welcome to the
summer and they stayed up to December; not only that they have been very
encountered, but the encounters with these ones have been great: very big
groups of them full of babies. Our swimming with dolphins’ activities were very
successfully with this species this year, not only because of the big size of
the groups, but also because of their especially curious behaviour of this year
😉
Fin whale was also a species sighted significantly, mainly
during our spring months but also summer and autumn. This whale species it is
not considered resident of the Azores, but even though it is true that these
whales are seen in spring and summer time during their migrations, for the last
years this species have been seen (not very often) around of our island even in
winter time, so who knows… We certainly need more studies
Out of the baleen whales that are found in the
Azores, three species have had a different behaviour compared to previous
years:
-The big surprise were the Bryde’s whales, since
2013 and before that 2009 that we didn’t see them, this year we had some
several individuals, including a calf.
-Blue whales this year were very abundant if
compared with other years
-Sei whales were also kind of a surprise as they
are usually sighted in spring summer time, but this 2017 appeared with a great
abundance in September, October, November and even in December!
We never know what we will see so we can expect a
surprise at any time of the year from any species. As well as whales and
dolphins we have also registered many sightings of turtles, ocean sunfish, manta rays, sharks, tuna, swordfish, flying fish, jellyfish and several species of seabirds.
Our graphs below summarise our cetacean (whale
and dolphins) sighting frequencies.
We hope you can join us in 2018! 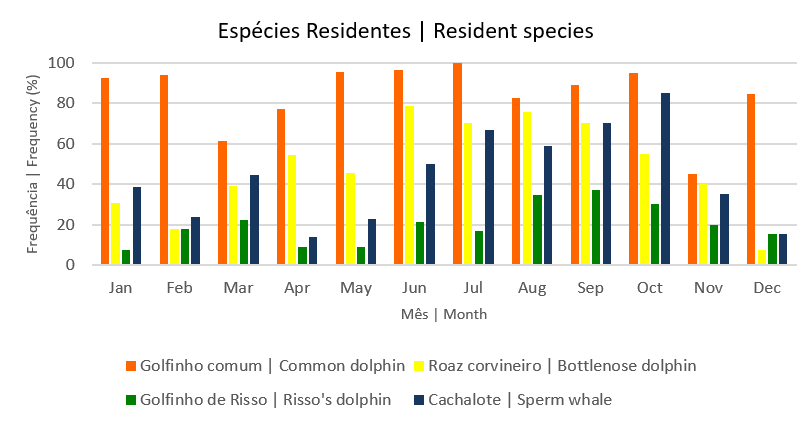 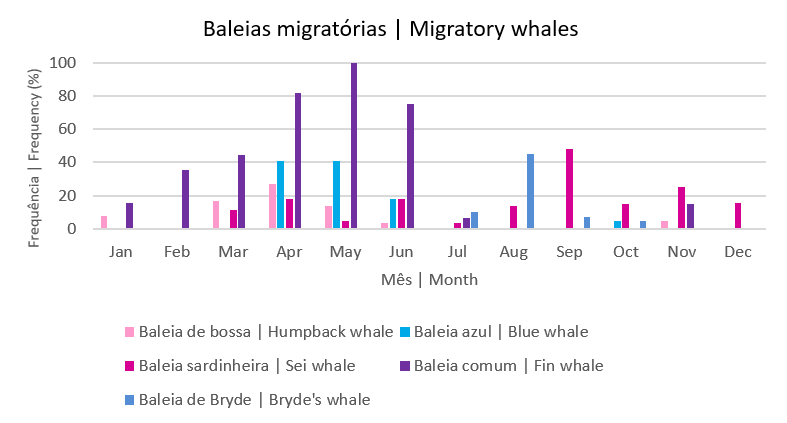