Risso’s dolphins are distinguished by their robust build and rounded head, and by their extensive white body scars. They are born dark grey  and accumulate more scars throughout their life until they are almost white at maturity. These scars may be caused by encounters with other Risso’s dolphins and from their major prey item, squid. Risso’s dolphins prefer deep oceanic waters in temperate and tropical zones.

In the Azores, Risso’s dolphins typically form small groups of fewer than 15 individuals. They often associate with squid fishing boats and occasionally also with groups of bottlenose dolphins and pilot whales. Risso’s dolphins can be very active at the surface, and they are sometimes seen breaching and lobtailing.

Read More
Orcas are the largest members of the dolphin family. Also referred to as killer whales because they kill and feed on whales,…
Read More
0
0 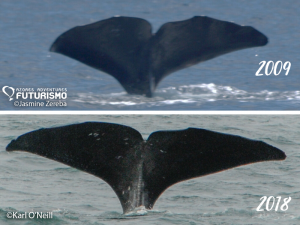