An Italian adventure! So here we are back from the conference that took place in La Spezia, Italy. At the 32nd conference of the European Cetacean Society and where Futurismo was present.

Example:
Mediterranean countries’ They announced the first large-scale cooperation study in the Mediterranean in order to study the cetaceans in the whole sea; for this project that is called Accobams all the Mediterranean countries are participating including all continents; researchers, scientists, private sectors and government are involved in this huge project which is a really big victory for cetacean science.
The conference was divided into differents topics (Habitat and distribution, Density and abundance, Management and conservation, Behaviour and ecology, Health and medicine, New tecniques, Acoustics and noise and Strandings) and included different presentations: short talks, talks and posters. The conference started with the topic of habitat distribution and finished with strandings.
During the habitat distribution talks the Azores were named many times, as an important
area (Mid-Atlantic Ridge) of connection  feeding and breeding  grounds for Fin, Sei and
Blue whales, the main baleen whale species that we sight during our whale watching tours, some studies show that this place is vital for these whale species connecting  these two grounds; in the Azores they will find a place to rest and feed in the middle of their giant migration.
A study about short-finned pilot whales in the Macaronesia area was also presented. They talked about the short-finned pilot whales that move along the Macaronesia area (Azores, Madeira, Canary) in which some of futurismo’s data was used. A poster was also made about the subject.
On the last day the Azores was named again in a project about the use of opportunistic data (from whale watching) to create some models for sperm whales and the possible use of them
for management. 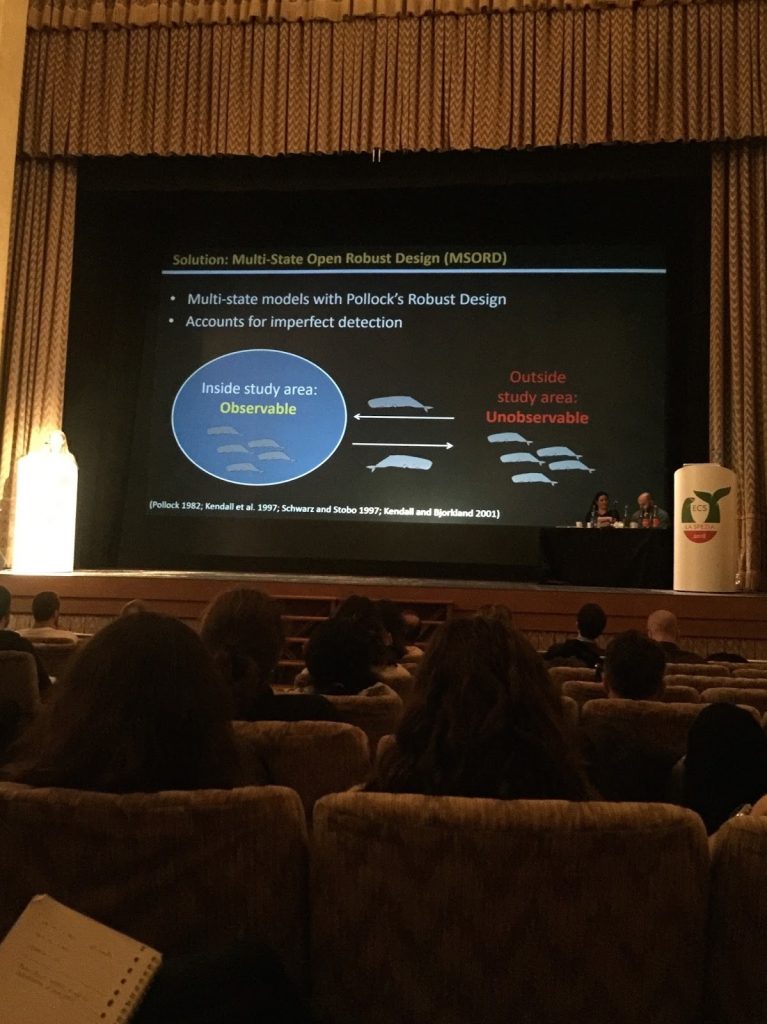 Some conferences were focused on deep feeders such as the beaked whales and sperm
whales both in the Atlantic and in the Mediterranean sea, with some very interesting results.
Some of the conferences also touched on the subject of whale watching approaches; especially
in developing countries where some studies are being carried out about the response of the animals to different vessel approaches; the conclusions were pretty much the ones we have already been applying in our company for a long time (key factors for a responsible whale watching are speed and angle of approaching the animals) and the result were mainly that the regulations are good in general but there is a big lack of control; for example, feeding the animals in order to attract them has shown a very negative effect for bottlenose dolphins. The key to deal with these animals and not disturb their natural development is to keep them wild.
In conservation the talks were very interesting, some focused on projects as the one in Greece with the endangered Monk seal, who’s biggest threat over there is the fishermen, so it is vital to show that marine protected areas benefit everyone, including humans, as they allow fish populations to recover, providing more fish for everybody. The short talks where very interesting and were mainly for the presentation of the different conservation projects around the world (seals, tracks of minke whales…)
We had a video night with many videos about different topics, the emphasis of these movies
was in marine conservation, some NGO’s and the star of the movies was… plastic.
Plastic was a very strong subject, not only on the video night but also in the conservation
talks and short talks.
Both macro and micro plastic (plastic doesn’t decompose it only breaks into smaller and smaller pieces that get smaller and smaller until they are microscopic) are becoming a very big issue.
Did you know that every year of 8 million tones of plastic is entering the world’s oceans, and growing year after year; this has called the attention of many scientists as this problem is growing in a massive way. Big pieces of plastic are entangling the animals (not only cetaceans but many many marine animals).
There was talk about some researchers that are studying the dangers of micro plastic in filter feeding species, such as the baleen whales spend their life filtering tones and tones of sea water and why is it so potentially dangerous?
Micro plastic can carry many organic contaminants ‘stuck  on’ their surface and filter feeding animals can absorb and accumulate these contaminants, this is what we call sub lethal
contamination.

In conservation they also showed ways to determine MPA (marine protected areas) based on breeding and nursing grounds for females and calves along the Atlantic shores.
A bit of morality related to the cetaceans, as their welfare and a very hard and difficult topic, how do we describe a sentient animal, where do we draw the line; it was interesting to hear about point of view related to marine mammals that were a bit less scientific.
One very touching and sad moment in the conference was when they talked about the Vaquita. The vaquita is a porpoise that is really at the verge of extinction; they live in the gulf of California and they are almost extinct because they keep getting trapped in the illegal nets that the fisherman  put out to capture totoaba fish, a fish that is used in Chinese medicine. The Vaquita
project (www.vaquitacpr.org) is trying to save this porpoise from extinction but, it is very difficult, as less than 30 individuals remain.
The population is very fragile, they have tried to remove the fishing nets but despite a big effort that englobes even the Mexican army they keep appearing as the totoaba fish tried to relocate the Vaquitas, but they are very fragile animals. In this presentation many people spoke and Sea Shepherd was involved, but sadly it felt more like a funeral for this species… 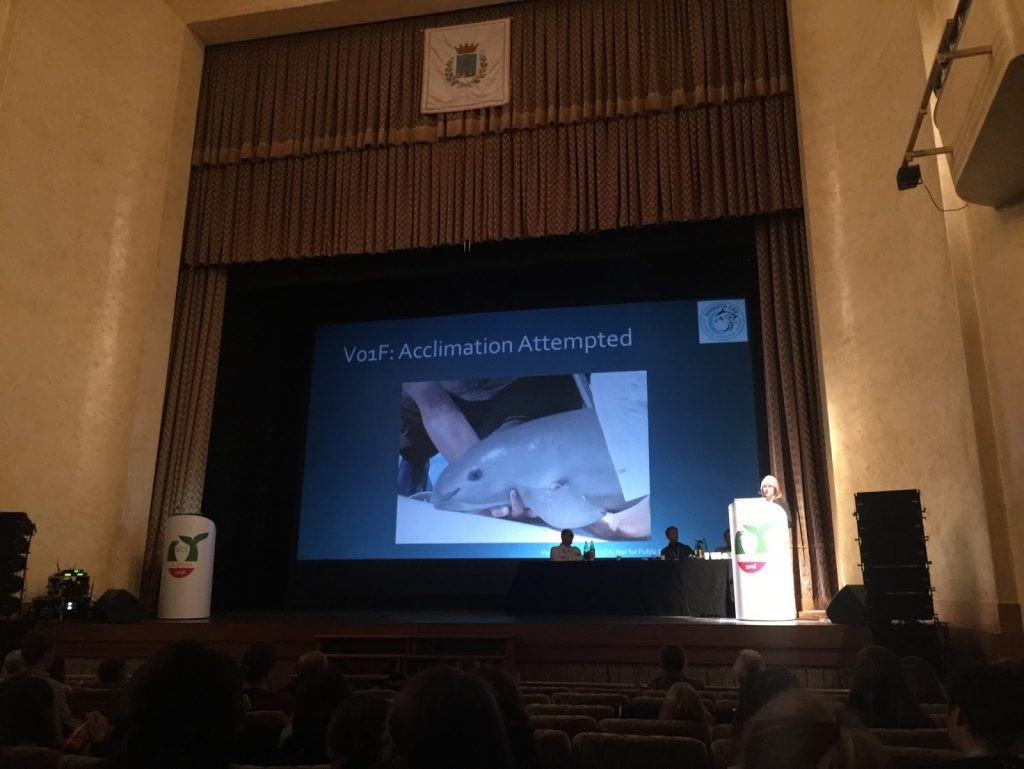 All topics were covered, with a lot of information about strandings, acoustics, health and medicine…  More things than we can even write about.
The poster sessions occurred every day according to different subjects, three of the biologist from Futurismo: Marina Gardoki, Biagio Vilovi and Víctor Ojeda presented our scientific posters. These posters show some of the studies that we are carrying out using the data we collect during our tours.
On the first day of the congress it was Marina and Biagio’s turn to show their posters presenting respectively a study about a male sperm whale that is living year-round in our waters, and an assessment of migration behaviour and first photo-ID catalogue of fin whales in Pico.

Then, on the second day was Víctor’s turn to show his poster where focused on analysing the temporal distribution of fin and sei whales that we sight in São Miguel Island. 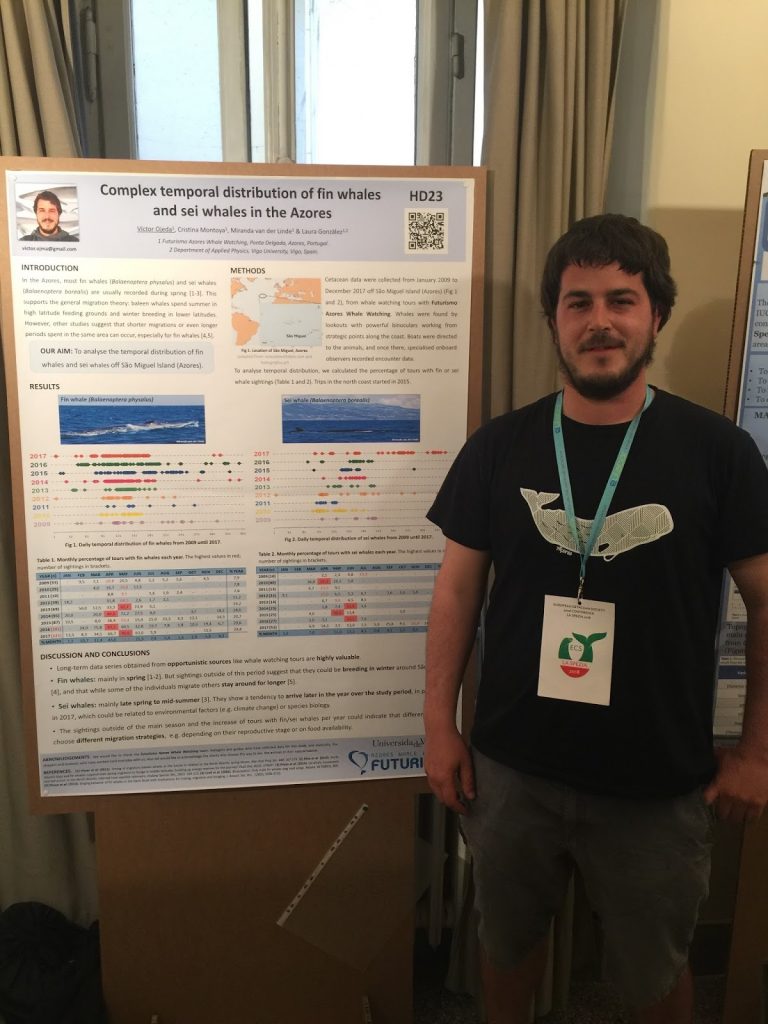 We had a realy great time, we met some very nice people and of course we learned a lot and we are back full of knowledge and new ideas!

We hope to be there next year in Barcelona with more work done!
Written by Marina Gardoki and Víctor Ojeda
Share
Tweet 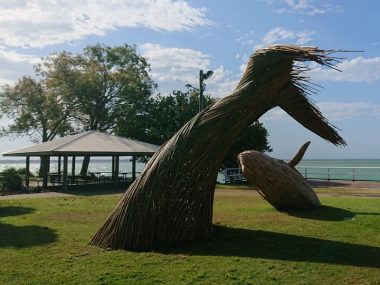