Fin whales are the second largest animals in the world. Their most distinguishing feature is the asymmetrical markings on the head: on the right side the lower lip, mouth cavity, and baleen plates are white, whereas on the left these features are dark. The dorsal fin is smaller and more falcate than that of the sei whale, and they have only one ridge on the head, unlike the Bryde’s whale which has three. Fin whales are among the fastest of the whales, reaching speeds up to 47km/hr and because of this they have gained the nickname “greyhounds of the sea”.

Fin whales have a wide global distribution. While many populations are thought to be migratory, resident populations also exist. In the Azores migratory fin whales are seen primarily during the spring months (as early as January, both normally between March until June). Fin whale can be seen any month of the year but this doesn’t happen every year. They are usually encountered alone or in small groups and often follow the same path. Sometimes we can observe feeding behaviour as they pass by the Azores. Between May 2006 and December 2015 we registered 363 fin whale encounters on the sea. Throughout the years we can see that we encounter more and more fin whales, but this species is endangered.

Fin whales are part of our research of photo identification and at the moment (2015) we have 44 individuals in our catalogue. We use the dorsal fin as a primary mark but also the chevrons/shades on the body. Interesting fact about fin whales is that the shape of the dorsal fin can vary a lot between individuals and can sometimes be confused with other whales such as sei whales. 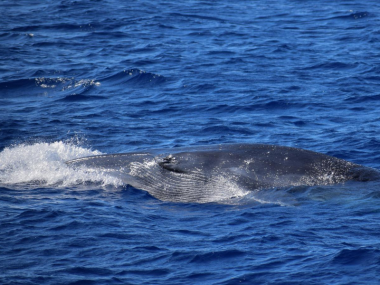