What is a beaked whale?

There are 21 known species in the beaked whale family (Ziphiidae). That is about a quarter of all cetaceans. The family Ziphiidae is divided ito 6 genera: Indopacetus, Ziphius, Tasmacetus, Berardius, Hyperoodon and Mespolodon. Very little is known about the beaked whales, or ziphiids as they are also called, because they are very shy and elusive and masters of diving. They spend as little as 8 % of their time on the surface and are therefore very difficult to study. The record for the longest dive is held by the Cuvier’s beaked whale, which was recorded underwater for 2 hours and 18 minutes during a study in 2014. Many of the ziphiids species look very similar and it is almost impossible to identify them at sea. Some species are only known from dead animals and has never been sighted alive.

The photo below of a Sowerby’s beaked whale breaching is a rare lucky shot captured in São Miguel, Azores in 2013. You have to be very lucky to see a beaked whale showing this much of the body of a beaked whale as they are usually very shy and elusive.

The first ziphiid to be discovered was the Sowerby’s beaked whale, from a stranded individual in the year 1800. Most information that we have today about ziphiids comes from dead animals captured during whaling or found stranded. The oldest ever recorded ziphiid was an 84 year old male Baird’s beaked whale. The longevity is unknown when it comes to most species, but it is estimated to be at least 25 – 40 years or more.

Ziphiids often live in small groups between 2 – 20 individuals. Groups of up to 100 individuals have been recorded and for some species are solitary individuals have also been found. They vary in size from 4 to 13 meters and 1 to 15 tons in weight.
One of the characteristics shared by a number of species is that their dentition is generally reduced to a single pair of tusk-like teeth in the lower jaws (that often protrude out over the top jaw) of adult males. In females they do not develop and remain hidden in the gum tissues. The teeth seem to play no part in feeding as females and juveniles are missing them. A study in 2008 showed that the teeth are a secondary sexual characteristic and females are presumed to select males based on the shape and size of the teeth and maybe also by the scars on the males. The teeth may also play an important part in competing to control a harem.
Ziphiids are made for diving, going down to depths of 1500-2000 meters and staying down for at least 85 minutes. They have several anatomical adaptations such as large spleens (most cetaceans have small spleens), larges livers and a streamlined body. Beaked whales have the densest bones of all animals. Many species have ‘flipper pockets’ where the flippers or pectoral fins are tucked in when diving. They are also characterised by the lack of a fluke notch, or a very small one, unlike all other cetaceans that have a distinct notch in the trailing edge of the tail. 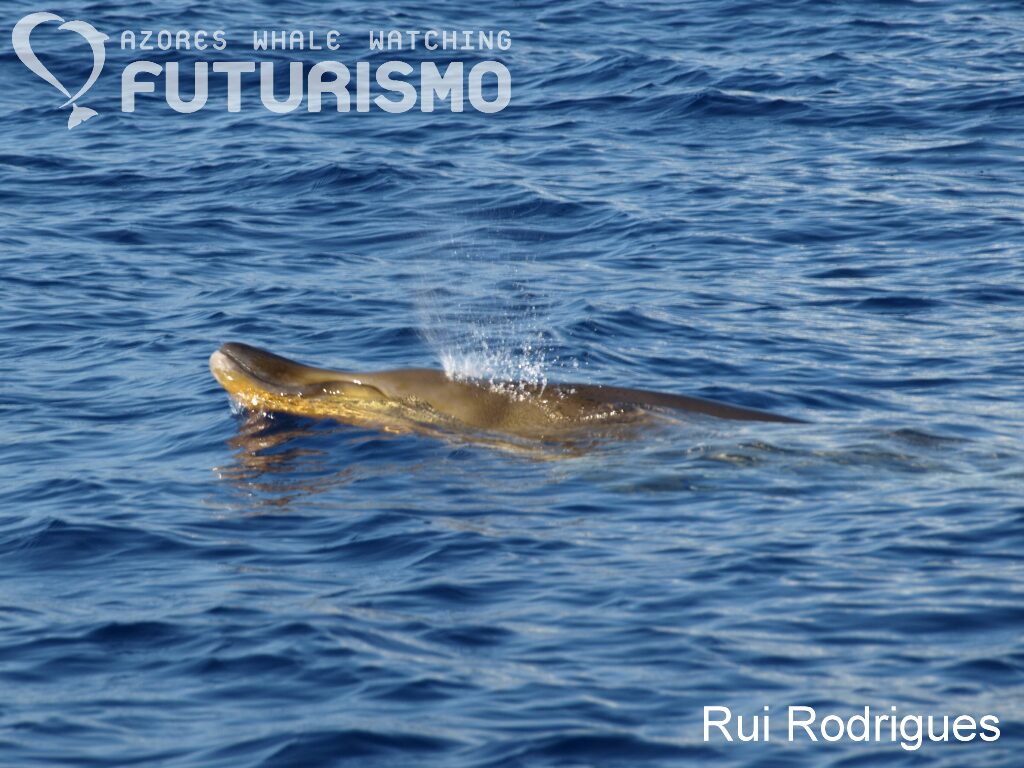 Ziphiids feed mainly on squid and fish (both benthic and benthopelagic), but also crustaceans and echinoderms (such as starfish and sea cucumbers). Ziphiids are suction feeders and all of them have a bilateral paired set of grooves on their throats that aids the suction by stretching and expanding to contain the food (similar to the throat grooves that baleen whales have). Instead of capturing their prey with their teeth, like other toothed whales, they suck it into their oral cavity (narwhals and belugas also do this). Their tongues can move very freely and by suddenly retracting the tongue and distending the gular (throat) floor, pressure drops within the mouth sucking the prey in with the water. Their prey live mostly in depths of 200 to 2000 meters. In 2014 the Cuvier’s beaked whale was given the title of the deepest diving animal in the worlds after being recorded diving down to 2,992 m during a study in 2014. In another study it was determined that, in one dive, the Blainville’s beaked whale can catch up to 23 prey.

How often do we see them in the Azores?

In 2012 we saw 3 different species of beaked whales (Mesoplodon spp.). Our 2012 statistics show that we encountered beaked whales on 2.3 % of our tours. As the numbers say, it is really rare to see them and we often encounter them by chance when we are looking for something else when we are travelling. Statistics from 2011 and 2010 show about the same numbers, indicating we see them about 6-8 times a year. Beaked whales are sighted more often by our vigias on land but most of the time our boats do not reach the area in time because they spend very little time on the surface and they are very elusive and shy in the presence o boats. Our most sighted species are Blainville’s and Sowerby’s beaked whales.
Blainville’s beaked whale

Why is Azores such a good spot for beaked whales?

We have very deep waters close to the shore in the Azores, which makes this a perfect place for deep divers such as beaked whales and the sperm whale. The topography (ocean floor landscape) is very complex, comprising steep cliff faces, ridges, seamounts and underwater canyons. This complex seascape and the influence of the Gulf Stream creates a lot of nutrient-rich upwelling that feeds a large food web in the region. The Azores waters are particularly rich in squid, which is what the beaked whale mostly hunt.

Which species can we see?

In the Azorean waters we can see up to 6 species of ziphiids. These are: Blainville’s, Sowerby’s, Gervais’, True’s, Cuvier’s beaked whale and the Northern bottlenose whale. Click on the names to read more about the individual species.

Several species of ziphiids have been caught in fishing gear but the numbers are low. It seems that by-catch in fishing gear has a low impact on ziphiids and are unlikely to threaten their populations. A bigger threat is the loss of prey. Over-fishing and a depletion of fishing stocks is a threat to all cetaceans. Ziphiids live in offshore waters where the controls and regulations are few because these regions all out of the EEZ (Economic Exclusive Zone) of all countries. International fishing fleets working in these waters are targeting the same species as the beaked whales.
Mining for fossil fuels on the sea bottom is a threat to the ziphiids feeding grounds. The effects of the mining is little known, but it is a growing concern. One area in ‘ the Gully’ of Nova Scotia has been given official protection to avoid disruption to a resident population of northern bottlenose whales. Deepwater trawling is the biggest threat to the ziphiids’ habitat. Even seabeds 2000 m below the surface are being targeted and this fishing practice is doing enormous untold damage to these deep-sea benthic habitats on which ziphiids depend.

Plastic and other rubbish in the sea are a huge threat to marine life, including ziphiids. Most stranded beaked whales are found to have plastic in their stomachs. Plastic bags are the most common items to be found in ziphiids stomachs, and everybody can play a role in protecting not only the ziphiids but all marine life by reducing the use of plastic.

Naval sonar is known to have a negative affect on cetaceans and can cause strandings. How the sonar cause these problems in unclear and still being investigated. Most likely it causes physical trauma, like damage to the ears which are essential for the animals’ echolocation system, used for navigation, communication and location of prey. Recent studies have shown that exposure to controlled low-level sonar caused Cuvier’s beaked whales to stop or slow down swimming, stop echolocating (so they are essentially “swimming blind”) and eventually swim away rapidly in the opposite direction. After exposure it took several hours for their behaviour to return to normal. It has also been suggested recently that sound pollution may cause behavioural changes in individual animals that results in developing a decompression sickness-like condition where gas bubbles appear in the blood stream. These bubbles may then cause physical effects (including joint pain, confusion, disorientation and loss of balance) that results in strandings and death. Another theory is that the sound pressure waves themselves are so great that they directly cause the gas to bubble. Detailed studies of ziphiids that washed ashore dead just 4 hours after military manoeuvers in the Canaries revealed blood hemorrhaging in the major organs that are consistent with intense nitrogen expansion. Not only sonar has an affect on the cetaceans, there are other sound pollution’s such as seismic surveying, oil and gas exploration and shipping noise.

The only ziphiid species that is still hunted is the Baird’s beaked whale. It is traditionally hunted by small coastal communities around the islands of northern Japan where they take about 60 animals per year. The impact the hunt has on the species is not known, although it is thought that they don’t take enough to threaten the species but may threaten local populations and disrupt the social structures of local groups by targeting the largest animals.

The habitat range of some ziphiids seems to be linked to the water temperature. Any changes in ocean water temperature can have an affect on the ziphiids directly and/or indirectly (for example a change in the distribution of their prey). Around north-west Europe surface water temperature is rising at up to one degree per decade, and these changes are probably linked to global climate change. There have been some changes in the distribution of ziphiids, for example sightings and strandings of typically warm water species (such as Gervais’ and Blainville’s) are occurring more regularly in Europe and cold water species (such as the northern bottlenose whale) are being sighted less frequently in the lower lattitudes part of their range. This strongly suggests that colder water ziphiids are being forced north by increasing water temperatures. The long-term effects of these changes are not known.