Cetaceans > How do dolphins sleep and breathe?

In this article we are going to answer some common questions about dolphins made by our guests.
In the world there are 44 different species of dolphins. 38 of them are oceanic, which are the most well-known ones, and five are river dolphins whom reside exclusively in freshwater or brackish water (Klinowska et al , 1991). They are all divided in five different families:
In the Azores archipelago 11 different species have already been recorded. Three of them can be sighted year round: bottlenose dolphins, common dolphins and Risso’s dolphins. 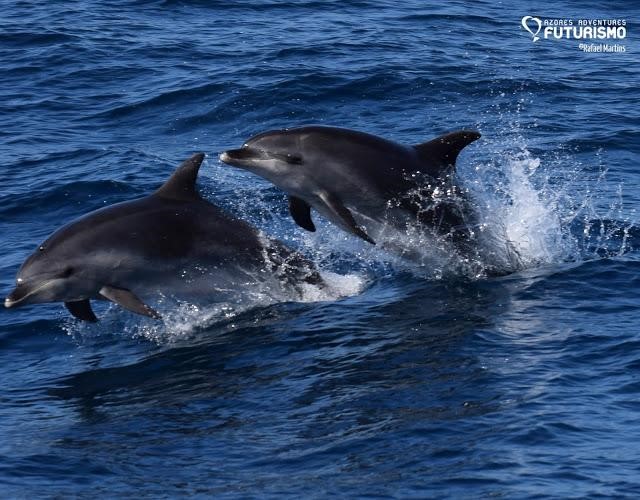 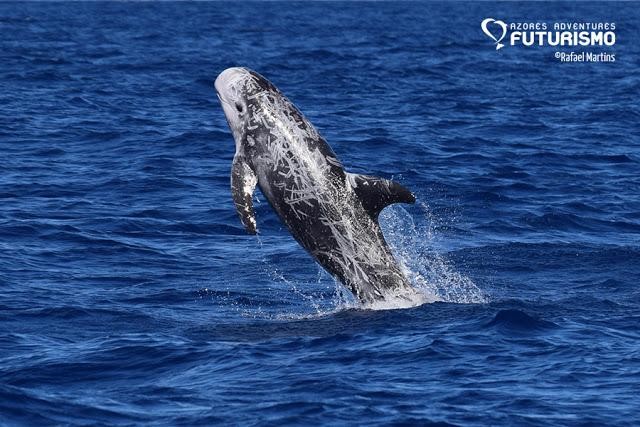 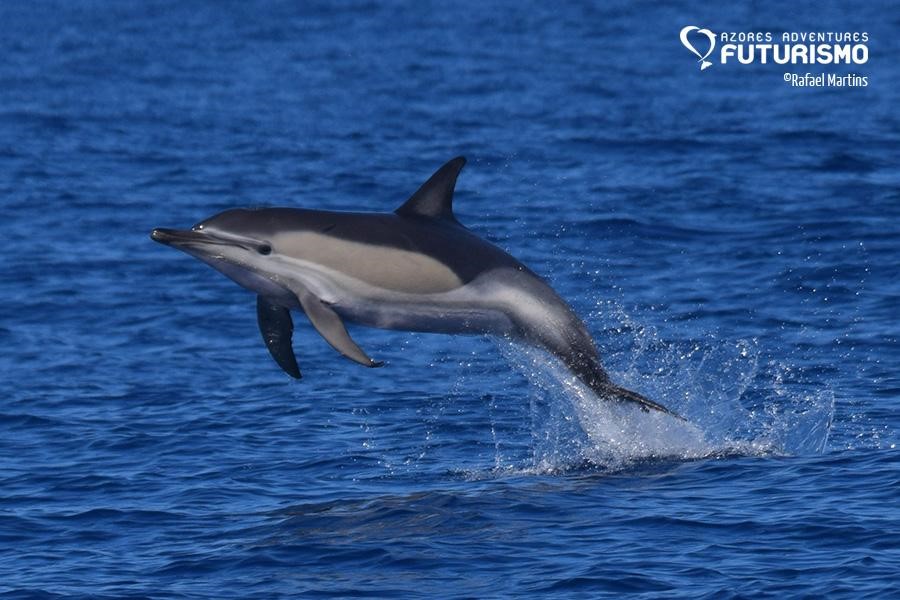 How do dolphins breathe?

Dolphins are mammals, which means they breathe air into their lungs, just like we do. They cannot breathe underwater like fish since they don´t have gills.

They breathe through the blowhole, adapted nostrils located right on top of their heads. When a dolphin breathes the air goes directly into their lungs, exhaling and inhaling rarely takes more than a fraction of one second and on average they take about 2-3 breaths per minute  (Ponganis et al, 2003).

Probably if you are a diver you have heard about decompression sickness or “the bends”. When divers ascend too quickly from deep waters, dissolved nitrogen in the blood forms bubbles which can cause acute pain in the muscles, paralysis, and in some cases even death. It’s a very big risk for deep water human divers as well as other diving species. But not for dolphins!!
When diving, dolphins reduce its request for oxygen. Their heart beats slower and the amount of blood pumped around the body decreases. During a deep dive only important organs such as the heart and the brain get oxygen rich blood flowing through them. There has been evidence that they can select the heart rate, and basically the volume of blood per minute that is pumped out from the heart (Cotten et al, 2008).
The marine mammals’ lung architecture shows two pulmonary regions: one air-filled and the other collapsed. The researchers believe that blood flows mainly through the collapsed region of the lungs, so dolphins are able to control gas exchange between their lungs and blood to manipulate the amount of nitrogen that enters their bloodstream to avoid decompression problems (Cotten et al, 2008).
We are involuntary breathers; we continue to breathe even if we’re unconscious. But dolphins are voluntary breathers; they must make a conscious decision to inhale air. This means that dolphins never truly sleep because their brain must always be active enough to initiate breathing.
So let’s go to see how dolphins rest…

Some of our guests in our trips ask us whether dolphins sleep. As mentioned before dolphins need to be “awake” to breathe, because it is a voluntary move. The brain waves of captive dolphins (Tursiops truncatus) that are sleeping show that one side of the dolphin’s brain is “awake” while the other is in a deep sleep, called slow-wave sleep. This is called unihemispheric sleep. Also, during this time, the eye opposite to the sleeping half of the brain is open while the other eye is closed (Mukhametov LM et al, 1997).
Unihemispheric sleep was thought to have evolved due to the dolphin’s need to breathe at the surface, but may also be necessary for protection against predators.
Written by María Huamán Benítez

Read More
Sperm whales are the most iconic cetacean species of the Azores.  They spend most of their lives underwater…
Read More
0
0

Read More
How long do dolphins live? In the wild most dolphins can live for a long time. Orcas may…
Read More
0
0